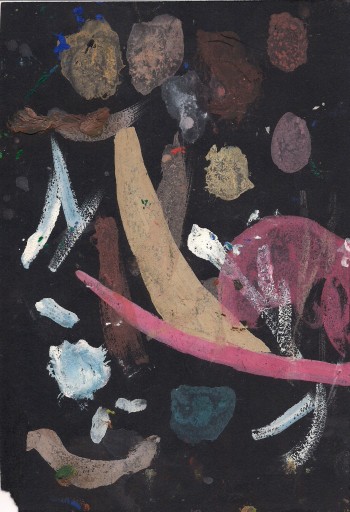 Manfred Loimer, born 1946 in Innsbruck, lived since 1972 as a freelance painter in innsbruck, elementary school Gymansium, bookseller exam, advertising assistant, short visit of the Academy of Fine Arts, publicity and promotion of various concert agencies, freelance contributor to the cultural editor of a newspaper, draw on Anatomical Institute, joint work with Prof.Krautgasser, participation in courses of the painting school in Innsbruck, permanent painting and drawing, member of the Association for the Advancement of Contemporary Art, Galerie Club der Begegung. Loimer, determined to be a mannerist by his pictorial-technical system and his being, lived-artistically-in a conflict between the psychic coincidence and the thought apparatus of his brain, which manifests itself alternately in the unconscious or in the mental, sustained by one incalculable dynamics. This conflict makes up the liveliness and graphic aesthetic appeal of Loimer's paintings. The color, shape, line and person of the artist-his personal handwriting-enter into an interdisciplinary play of forces, a whole emerges, and yet again something draining away, a peculiar, incomprehensible world becomes conscious to the art-observer in this painting. Loimer chose as material for his generous-powerful painting predominantly the human-any, not a specific one. In this way, his pictures become an allegory about the profane existence. Frequently Loimer wrote small poems about his paintings. Manfred Loimer died on 01.06.1995