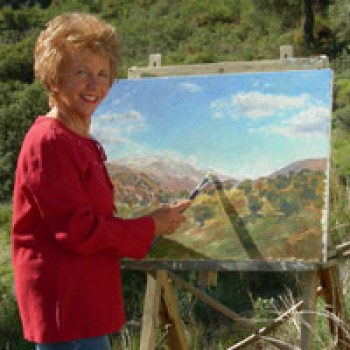 An Artist in Andalucia

I grew up in Falmouth where, after leaving Falmouth High School, I spent a year at Falmouth School of Art. Then followed three years at Hornsey College of Art in London where I obtained a Diploma in Art and Design. I  then spent a post-graduate year at the West of England College of Art in Bristol where I gained an Art Teacher’s Diploma and a Certificate in Education of the University of Bristol. I  lived and worked in Truro for over 30 years and became one of Cornwall’s most popular artists. My paintings have been exhibited in New York, Tokyo, Paris and London and have been bought by collectors from all over the world. I have published 4 books which became local bestsellers - “The Natural History of a Westcountry City”, “Margaret Merry’s Cornish Garden Sketchbook”, “Sea & Sail” and “Tidal Reaches”.

In 2002 I moved to Spain and now live on an olive farm near Loja in Granada. I now get my inspiration from the dramatic scenery of Andalucia which I finds lends itself to the medium of pastel and the architecture of Granada and its villages which I prefer to capture in watercolour.